Ellen DeGeneres, J.K. Rowling, Shane Dawson, Chris Pratt, Jeffree Star, and more comically known, Pepe le Pew, the cartoon skunk, are some of the few victims of cancel culture. Cancel culture is a movement that supports the removal of support for individuals and their work due to an opinion or action on their part deemed objectionable to the parties “calling” them out. Those deemed to be “cancelled” is usually in response to a racist, misogynist, transphobic or homophobic comment. It’s no shocker that they see their careers and futures ruined. But is that a fair price to pay?

Why is cancel culture needed?

Cancel culture is a weapon of the people. When the justice system fails, the masses rise. One of the greatest victories of cancel culture is the #metoo movement. It was a social movement against sexual abuse and sexual harassment where people publicize allegations of sex crimes. It put several criminals behind bars and devastated their position in society, something law failed to do. More recently, a prime example is the BLM movement. It was protesting against incidents of police brutality and racially motivated violence against black people. The idea that this culture gives a voice to the unfortunate or less powerful people is what made it so popular. But like a coin, this story has two sides.

Why is cancel culture becoming dangerous?

Many times, cancel culture is not very productive . President Barack Obama once stated that cancel culture “is not activism”. He went on to proclaim, “That’s not bringing about change. If all you’re doing is casting stones, you’re probably not going to get that far. That’s easy to do.” The issue is that cancel culture is a slippery slope and leads to intolerance in democratic societies as people systematically exclude anyone who disagrees with their views. The harshness of it is even worse. Cancel culture stands a chance at permanently damaging an influencer’s reputation, leaving them with little opportunity for growth and character development. There are no second chances with this system.

Where is the compromise?

Meyers Leonard, Miami Heat’s center, was seen online using anti-Semitic slurs. The whole world crashed on him, while he did not even know what the word meant. Julian Edelman, a jewish wide receiver in the NFL, did what is to be called the “proper” cancel culture. He wrote an open letter to Meyers stating the following: 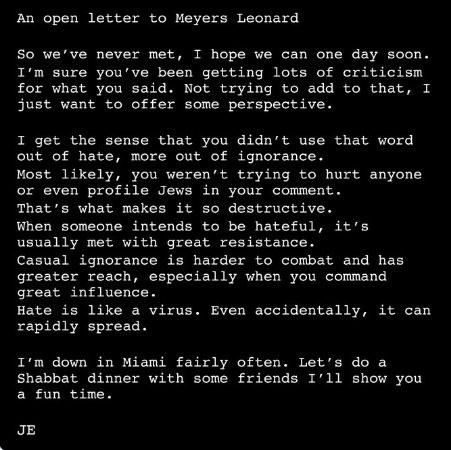 This is how we should handle problems, with a chance for growth and improvement. Not killing the only chance at rescuing these individuals from wrong decisions. We must keep cancel culture for those whose voices are not heard, but safe enough for the victims to have a second chance.