The Migrant Protection Protocols (MPP), informally known as “Remain in Mexico,” is a policy that mandates that Mexican immigrants without proper documentation must wait in Mexico while seeking asylum in the United States. Shortly after President Biden’s inauguration, the White House stopped the MPP. This April, however, the state of Texas sued the program’s suspension in Biden v. Texas.

Federal judge Matthew Kacsmaryk ruled in Biden v. Texas that the Biden administration did not have enough reason to get rid of the MMP and that its procedures for asylum-seekers entering the country were unlawful. Last Tuesday, the Supreme Court also issued an order, requiring the administration to comply with Kacsmaryk’s order. With a conservative majority of 6-3, the Court ruled that the Biden administration had likely violated federal law by “arbitrarily and capriciously” attempting to rescind the MPP. The Court also cited the 2020 decision in the Department of Homeland Security v. Regents of University of California case, which blocked the Trump administration from rescinding an Obama-era program protecting young immigrants (called “Dreamers”) who came to the U.S. as children.

Texas’s Attorney General Ken Paxton celebrated SCOTUS’s decision, arguing that rescinding the MPP would have placed a burden on the local governments that had to provide services to immigrants. 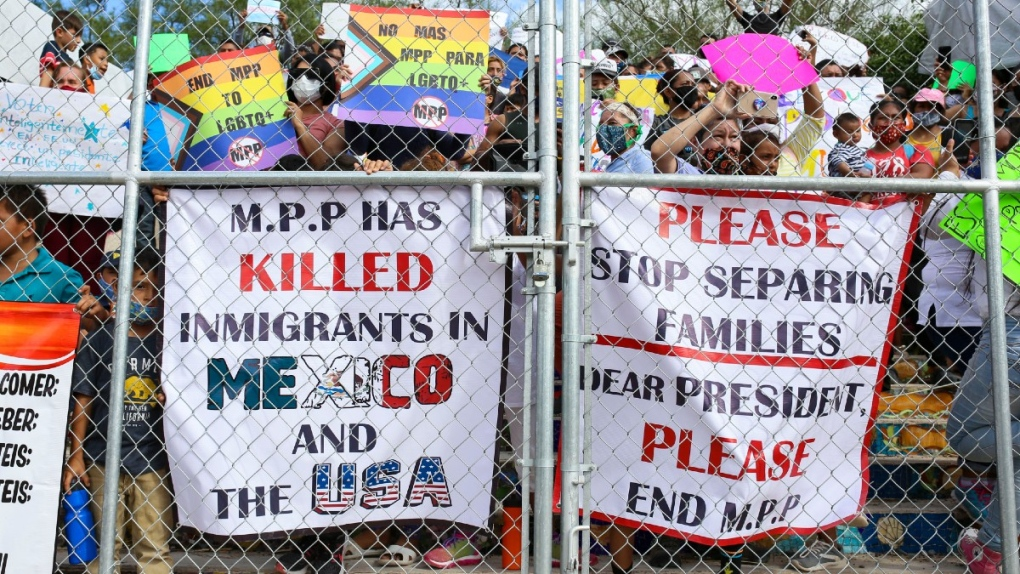 CTV News (protesters of the MPP)

According to Ian Millhiser, author of Injustices: The Supreme Court’s History of Comforting the Comfortable and Afflicting the Afflicted, the decision in Texas defies a foundational principle of court decisions — judges should be reluctant to engage in foreign affairs. The decision in Texas, however, “fundamentally shape[s] the balance of power between judges and elected officials in the process.”

Right now, the Biden administration has only two choices: (1) it could provide a more fleshed-out explanation for ending the MMP, or (2) it could reinstate Trump’s policy. Because the Supreme Court ruling suggests that the administration did not adequately explain why it chose to end the MMP, Secretary of Homeland Security Alejandro Mayrokas could comply with this decision by issuing a new memo providing a more fleshed-out explanation. The issue with this choice, however, is that SCOTUS offers no hint as to why it deemed the original explanation insufficient. The second choice is also untenable: as Acting Solicitor General Brian H. Fletcher writes, “The district court’s mandate to abruptly reimpose and maintain that program under judicial supervision would prejudice the United States’ relations with vital regional partners, severely disrupt its operations at the southern border, and threaten to create a diplomatic and humanitarian crisis.”