On Thursday, October 21st, President Biden addressed a Baltimore crowd at the CNN Presidential Town Hall meeting. Although the people who asked the questions were Baltimore citizens, many Americans across the nation were also waiting to hear the answers.

What Did He Say and Promise?

Biden was asked numerous questions from both Baltimore residents and CNN Anchor Anderson Cooper, mostly about his plans for legislation and ideas about future projects. A few moments stood out, though. For example, a college student asked President Biden “Given that it’s nearly been a year into your campaign, why haven’t you been to the southern border of our country?” (CNN). Biden ignored the question at first, but afterwards, Cooper asked him once again. Biden explained that he did not have time to get there, but his wife visited there; however, it is known that Jill Biden had only traveled to the border in December 2019, during the presidential campaign. The fact that Biden has not taken a trip down to the southern border, a hot-bed for immigration discussion and conflict, is a scar on his reputation; Biden had promised during his campaign that immigration conflicts would be solved, but he has not even gone and seen them for himself. Some argue that Biden does not need to visit the border to address the problems there, while others, namely Republicans, see it as hypocritical.

Among other issues, Biden discussed issues such as the Covid-19 Vaccine Mandates and his Spending Plan; when asked about his plans to require police officers and first responders to take the vaccine, or be forced to stay at home or be let go from their jobs, Biden confirmed the sentiment. This has wide implications, with many people asking the question of whether that will be extended to other occupations.On another note, Biden reneged on a few of his spending plan promises and goals. In the wake of the October 18th deadline for the US “running out of money”, proposed by Janet Yellen, Biden has had to make some compromises with Republicans in order to make sure that a spending budget can be worked out; this, however, led to Biden having to cut down paid-leave provisions from his promised 12 weeks to 4 weeks. Moreover, Biden stated that it would be a ‘reach’ to ensure dental, hearing, and vision coverages to Medicare, a major part of the progressive legislation plan. He cited Senator Joe Manchin and Kyrsten Sinema as similarly opposing the coverages for Medicare.

Furthermore, Biden discussed the ongoing supply chain crisis that is mostly affecting the US through the Californian ports. Biden suggested that he could deploy the National Guard to ease the problem because of the threat to the economy that it poses. On a bright note, Biden says “I promise you, I guarantee you, we’re going to get free community college in the next several years” (CNN). Although it might not happen now, this most certainly is a promise that many young Americans will be counting on.

How Did People Respond?

Baltimore residents at the meeting were mostly relieved to hear their President address their concerns and hear his promises about upholding his goals and furthering the well-being of Americans. His promises to enforce vaccine mandates and provide free community college tuition were likely a huge relief for many Americans; however, Biden’s arrival at the town hall and his statements were not received well by everyone. For example, when arriving at the hall, numerous protestors stayed outside and tried to make themselves heard on a range of issues, from helping undocumented immigrants to vaccine mandating. Afterwards, multiple organizations such as CNN, (the coverer of the meeting) and the Government Accountability Office made sure to fact check a few of his statements. Biden made quite a few mistakes, including getting the tax rate numbers wrong, and overblowing his administration’s achievements on vaccine rollouts. 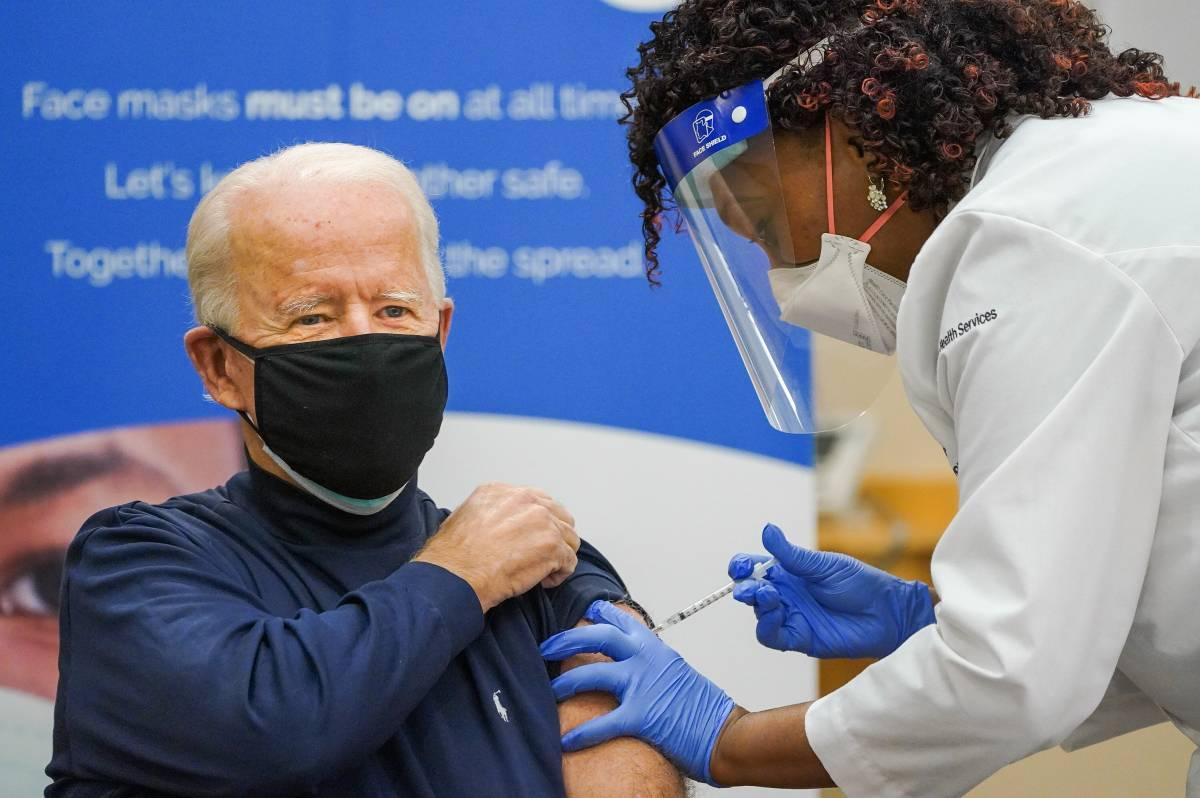 Joe Biden being vaccinated, a process that has been a large part of his early-term legislation and agenda (AsianLite)